The new version 16 has been released in Spring 2020, with attractive enhancements for the four different versions of ODEON.  For the history of development of the ODEON software, click here.

The new version of ODEON is packed with attractive features and enhancements, listed below. The headings will specify what editions of ODEON: (B) Basics, (I) Industrial, (A) Auditorium and (C) Combined, the feature is available in. If not specified, then it is available for all editions. 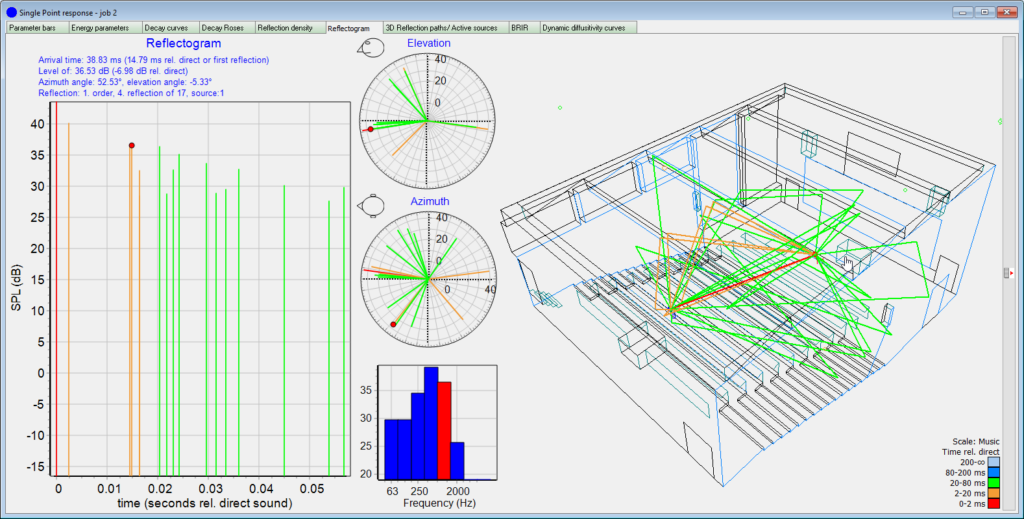 The Decay curve tabsheet of the Single Point Response has been enhanced to display direction of arrival of intensity components, 3D hedgehog graphs, and allow tracing intensity components in the 3D View. The Decay curve for the selected band in the Single Point Response can be displayed next to the 3D View. This allows watching the direction of intensity peaks/slices inside the room model. It is possible to scroll through the peaks/slices in the intensity curve and see where each individual peak/slice comes from or to show a complete hedgehog for the intensity curve. When the curve is zoomed, the 3D display shows the corresponding part of the hedgehog. This is an invaluable tool for tracking down e.g. late echoes which cannot be identified in the Reflectogram. 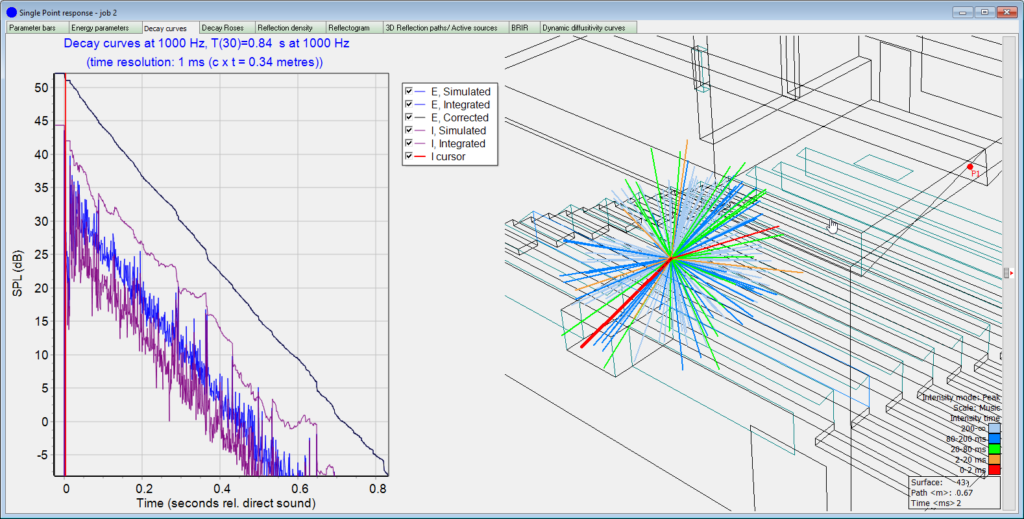 The improved tool also allows up to 1st order ambisonic measurements (4-channels), which is fully compatible with the improved load impulse response tool (described below). 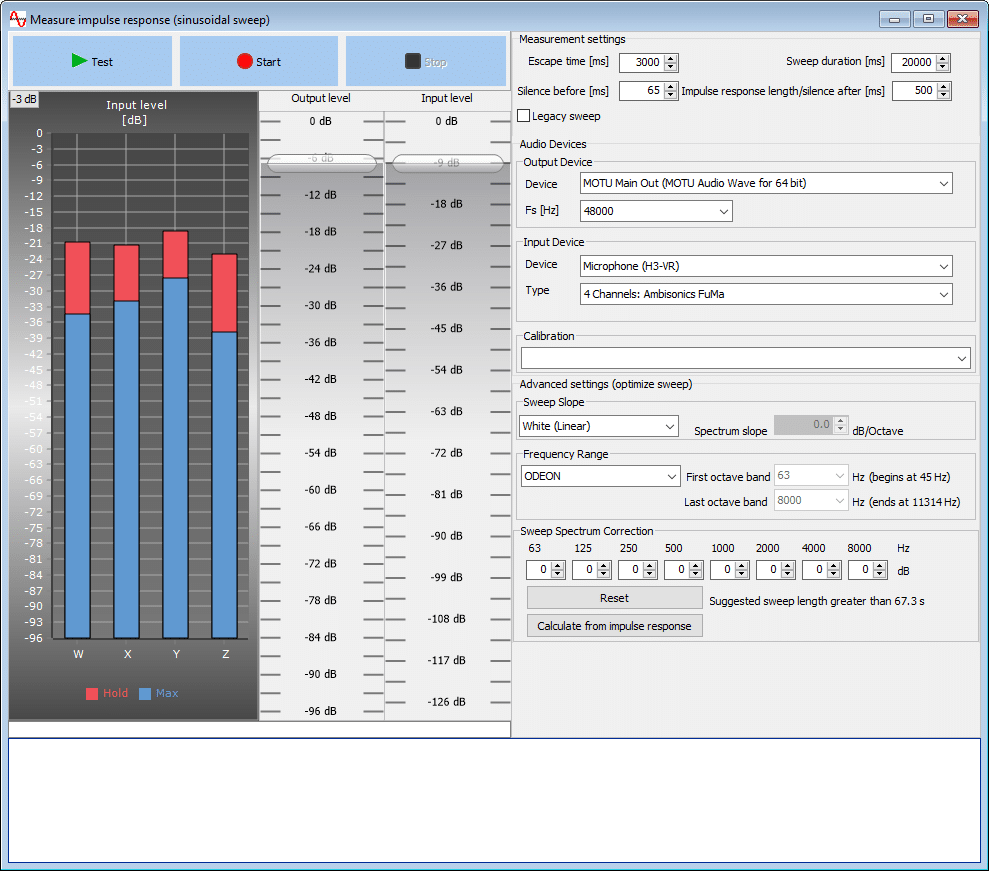 The 3D Matrix tool calculates and displays room acoustics parameters of all point sources on the positions of all the other point source positions.  The tool makes it easy to see the effect of a given point source on all other point source positions and can be an efficient tool for investigations of an open plan office or in an orchestra. The 3D Diagonal displays the parameters calculated at the positions of the sources them self (excluding the direct sound which obviously can’t be calculated at a distance of 0 meters). This can be useful for evaluation of e.g. how loud or intelligible one’s own voice sounds at a given position in the room. 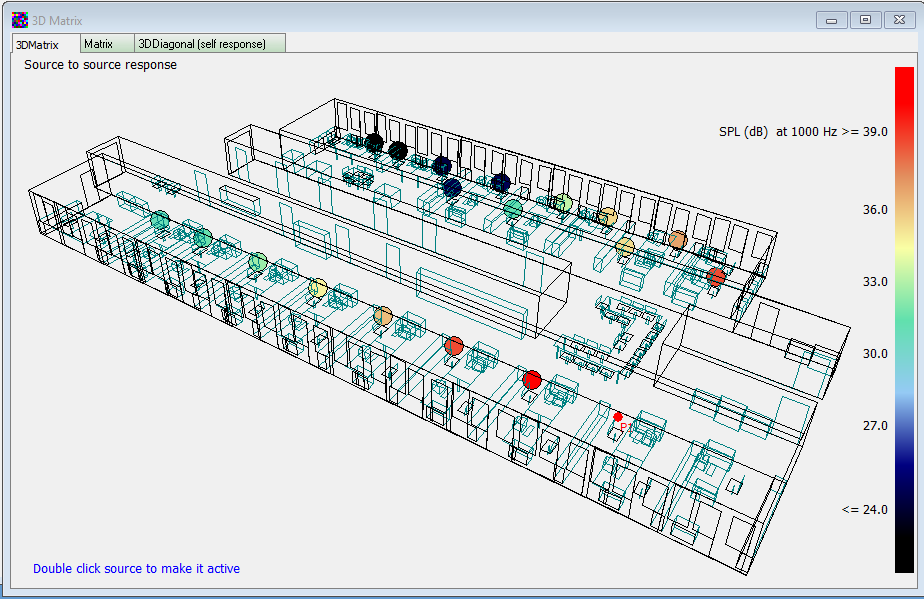 The Measured Impulse Response tool can now recognize the 4 channels measured with an ambisonic microphone and visualize the intensity components of an impulse response. The four channels appear as W (omni) and X, Y, Z.

Play it! An improved tool for auralization of measurements(A)(C) 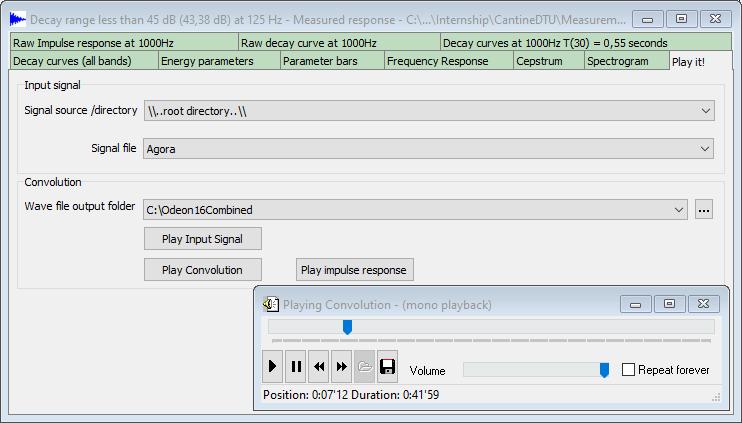 A Material Archive functionality has been added to the Materials List. This allows to restore previous material configurations (without losing the current one). ODEON keeps a list of the last 10 material configurations ordered by date and with an optional description (such as “ceiling absorber and extra absorption on side wall”). The description(s) can be entered in the yellow field in the material list or in the Material archive display. 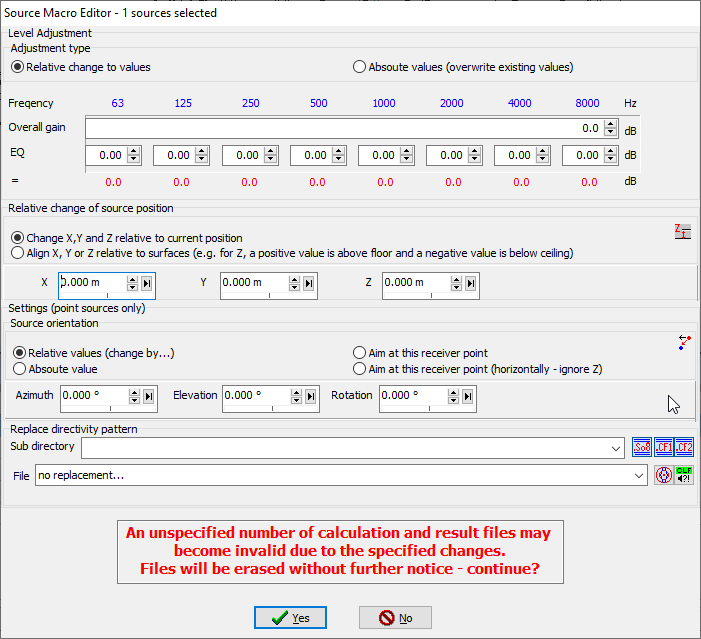 A new align tool allows aligning a source or a receiver relative to another source or receiver e.g. putting a receiver 2 metres from the source at an angle of 45°. 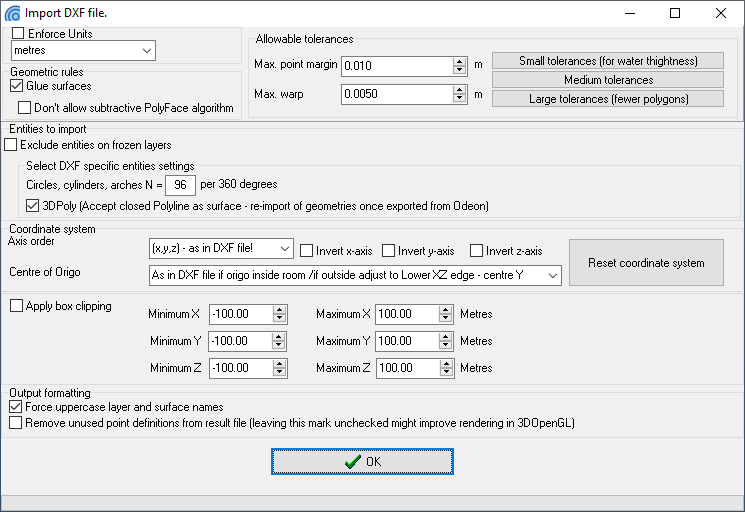 With the installation also come measured headphone responses for the following inexpensive headphones allowing compensation for their frequency response: AKGK72, AKGK240studio, Behringer HPS3000, Roland RH5 and Shure SRH240A. These responses have been averaged over a number of repeated measurements with repositioning of headphones for optimum compensation. 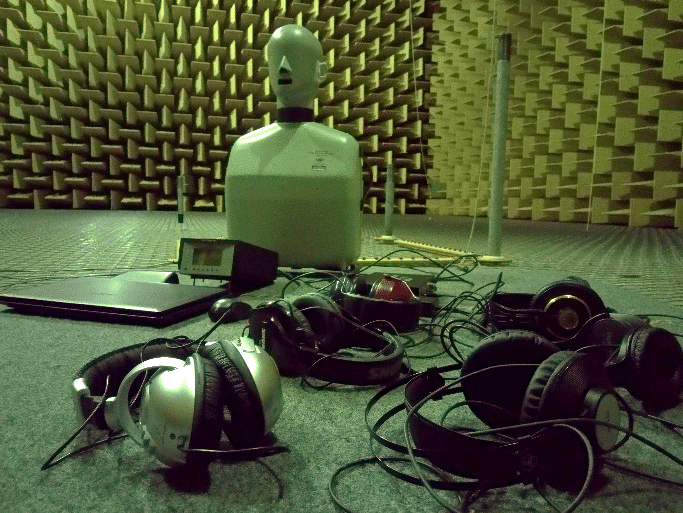 The enhanced 3D Billiard supports visualization of absorption in 3D. 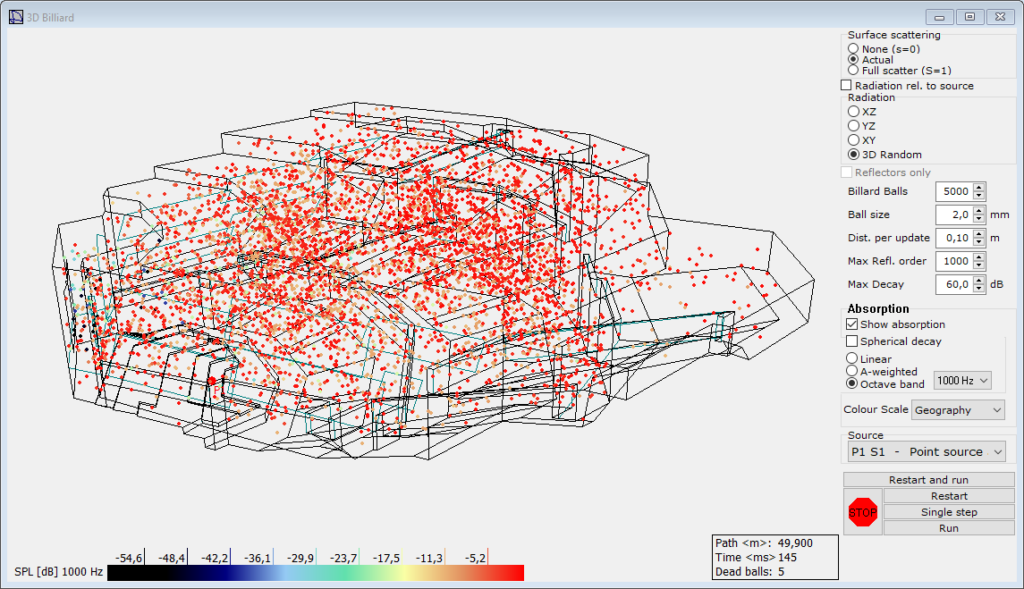 Support for drawing layers in the 3DEdit source displays

The feature allows some parts of geometry to be removed from printouts and graphics exchange and while editing source positions.

It is possible to edit a source/receiver by clicking directly in the 3DEditSource display. Use CTRL+ RMB to open the context-sensitive menu and create a source or receiver.

Ruler functionality in the 3DView

The tool can be used for indication of distance between points, and especially between corner points in the geometry. Press “m” to enable the modeling options, which allows the ruler functionality. 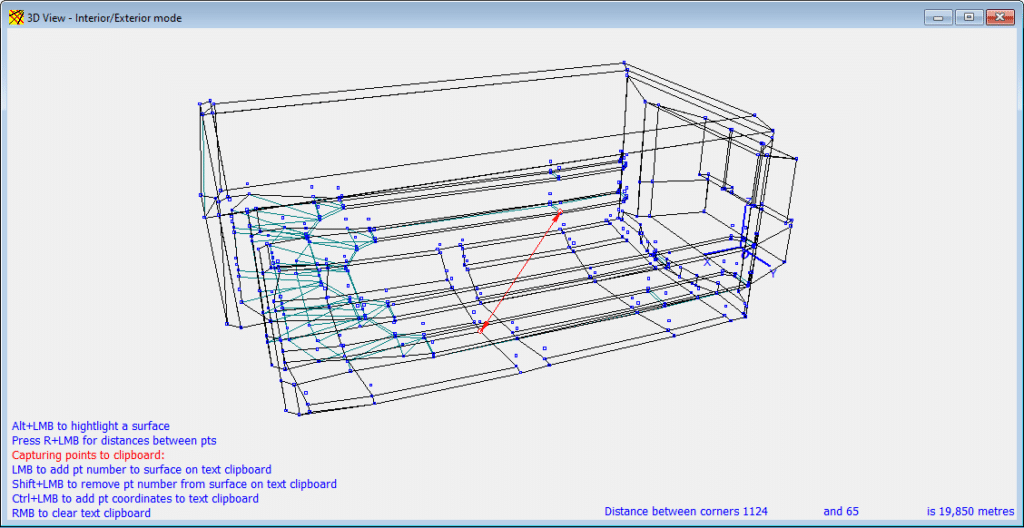 The G parameter used to be expressed as SPL under certain conditions, which has proven to be confusing when looking at results. Since ODEON 16 it is explicitly included as a room acoustic parameter in the Room Acoustics Parameter List. The G parameter is calculated in simulations if there is only one active source in the job of interest and that source is Omni directional (if the directivity file assigned is contains the word omni). The source power assigned to the source is not important -ODEON will automatically normalize the results of the G-calculations to 31 dB source power per octave, as required by ISO3381-1. This means that it is possible to calculate e.g. absolute SPL values in a Job simultaneously with G and that the G parameter will be listed by its correct name. If the requirements for the G calculation are not meet then the results for G will be empty.

When opening a simulation from previous versions, make sure you load the new parameters by clicking on “Load factory default” as shown in the figure below. 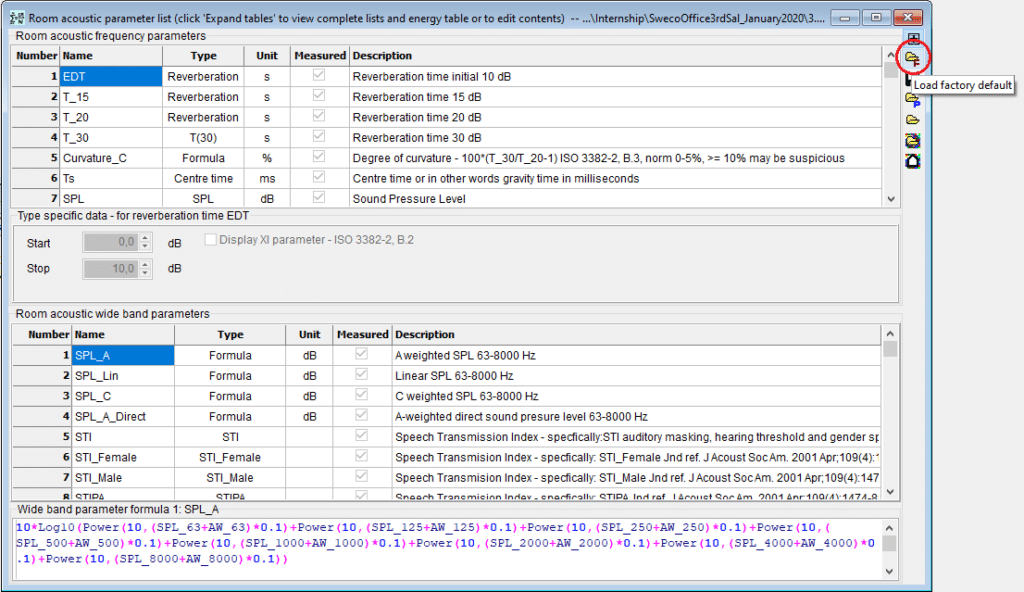 In addition, in ODEON Auditorium and Combined, a Late Lateral G parameter (L_j) is defined. 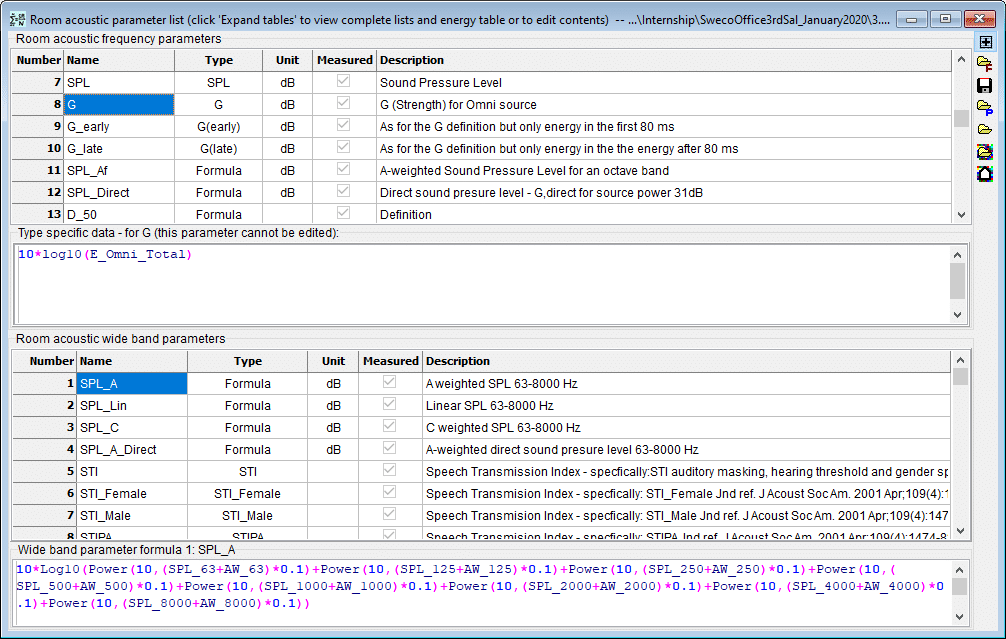 To avoid confusion, parameters according to ISO 3382-3 (Open plan offices) and ISO 14257 (work rooms) are only calculated and displayed as part of the Multipoint response results if the following conditions are met: 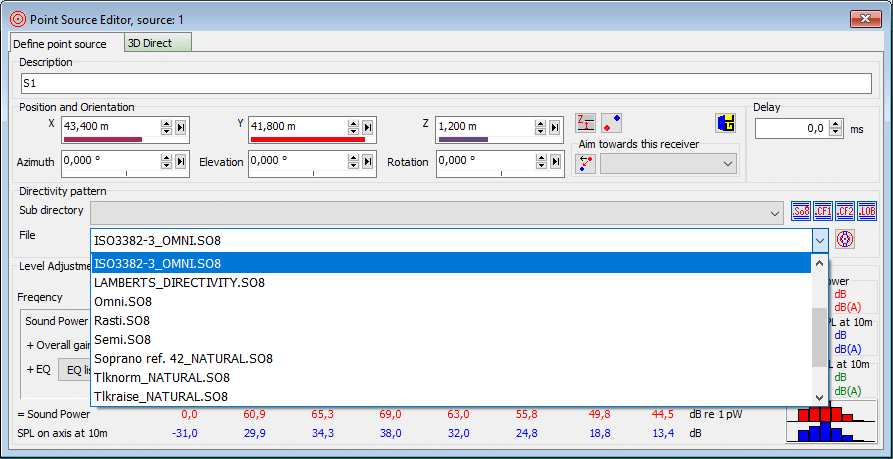 In the 3DGrid it is possible to transfer the estimated average SPL of the currently displayed grid to the Background noise level in the Room Setup. This is useful when a realistic background noise level needs to be defined in order to estimate speech intelligibility (STI). To do so, a job has to be defined with the appropriate active noise sources in order to estimate the SPL as the background noise. When the grid has been calculated open the 3DGrid, select the Fractiles tabsheet and press the S shortcut. 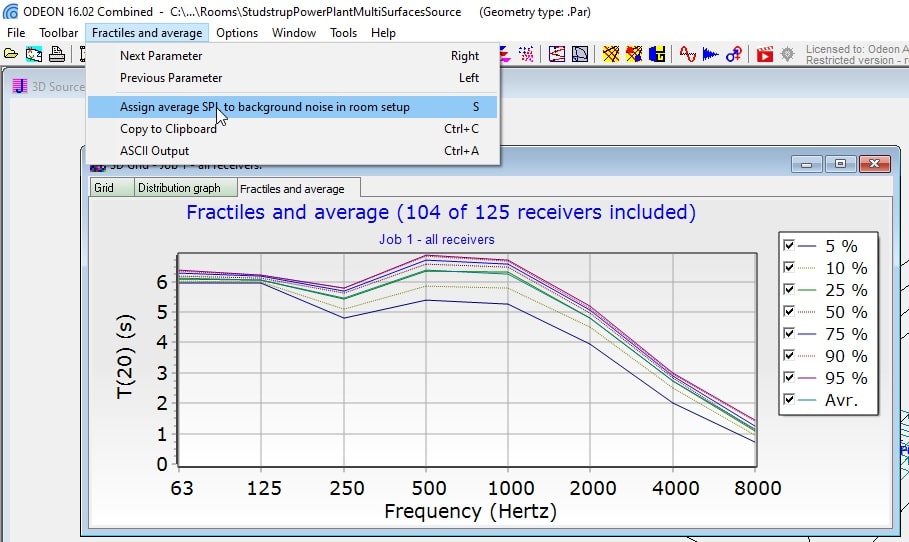