The ODEON project was initiated as a cooperation between the Technical University of Denmark (Dpt. of Acoustic Technology) and a group of consulting companies in 1984 with the purpose of providing reliable prediction software for room acoustics. The years invested in the ODEON development has provided a reliable yet easy to use room acoustics prediction and measuring software. Today ODEON is used for a wide range of applications. 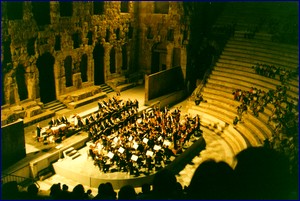 The first versions of ODEON were targeted at solving acoustic problems in concert and opera halls. The software was named after the ancient Greek odeon, that is said originally to have been roofed.

Features and updates from previous versions

Release of Version 13, with an improved user interface, a material optimization tool, enhancements in the measuring system and many more features.

Version 12 is released with an impulse response measurement system integrated into the software. With this version, projects become more efficient than ever since measurements and simulations are compared side by side throughout the whole process.

The release of ODEON 11.0 with increased calculation speed and a new acoustic parameter list for selecting or creating the desired result-parameters.

The SU2ODEON Plugin for Google SketchUp was developed.

Release of ODEON 10.0, which includes support for array loudspeakers and beam steered arrays (Auditorium and Combined editions), and calculation of one and two point diffraction around objects according to A.D. Pierce. There are also improvements to the Extrusion modeller and the ODEON editor has been greatly enhanced.

Odeon A/S moves to new premises at Scion DTU and starts selling the software directly with Brüel & Kjær as secondary sales channel. A new type of hardware lock is introduced for upgrades to version 9.1 and 9.2

Release of ODEON 9.0. This version includes transmission through walls and improved diffraction handling. Professional audio formats are supported and the quality of auralisation is improved. A new 3D Direct Sound display is particularly useful for the design of loudspeaker systems.

Release of ODEON 7.0, including an initial version of the ODEON Extrusion modeller for graphical modelling of geometries, the ODEON GIF animation Workshop for editing of animations, Surround auralisation based on Ambisonics Techniques, multi surface source for improved modelling of industrial noise sources and a few improvements to the parametric modelling language.

Release of ODEON 6.5, Intensity decay curve for echo tracking, graph for comparison between measured and simulated parameters, improved modelling language for faster modelling, support for layers in the geometries when modelled in ODEON’s own format and when imported from a CAD drawing.

Release of ODEON 4.2 with improved calculation algorithms for early reflections. Angle dependent absorption and OpenGL displays for improved visualisation of the rooms. The concept of Acoustic Colours is introduced to visualise the acoustic properties of materials in a room model. A material editor is added to the material list. The modelling language is extended, and it is now possible to model shapes like Box, Cone, Cylinder, and Dome using a single line of code. Coordinate manipulation is extended in order to allow flexible use of these shapes and reuse of other geometries.

Verification of ODEON 3.0, conducted by ELSAM PROJECT DK. Release of ODEON 3.1 for Windows95/NT.

Project with ELSAM PROJECT DK developing algorithms for modelling of large sound sources for use in industrial environments.

Vector based scattering was implemented as a more efficient method in ray tracing. ODEON 2.5 participated in the ‘International Round Robin on Room Acoustical Computer Simulations’, conducted by PTB in Germany (Results were presented at the ICA conference in Trondheim 1995). ODEON was one of three programs out of 16 to be judged ‘Unquestionably reliable in the prediction of room acoustical parameters’.

Use of ODEON in architectural competition for design of an opera house (Compton Verney, winning proposal by Danish architect Henning Larsen).